Neil Malherbe will be a speaker at an SCBWI event to be held at the Sandton Public Library on 2 July 2013.


He is the 2013 Winner of the Crystal Kite Award for the Africa Region for The Magyar Conspiracy which also won the Sanlam Silver Prize for Youth Literature in 2011. The book is published by Tafelberg and is Neil's first novel for young adults.

Neil Malherbe grew up in Pretoria, where he matriculated from Pretoria Boys High School. He received his BEd and MEd at Rhodes University.

Neil has taught English at a number of schools around South Africa and is currently headmaster of Penryn Preparatory School near Nelspruit.

He is passionate about sport, specifically waterpolo and rugby, and has coached waterpolo at national level. His other passion is to enthuse children about reading. He enjoys watching sport, eating good food, reading and spending time at his beach cottage in the Eastern Cape.

The Magyar Conspiracy is a murder-mystery set in Hungary and South Africa featuring a waterpolo competition. It has been described as a real page-turner. The author hopes it will encourage boys to read more. 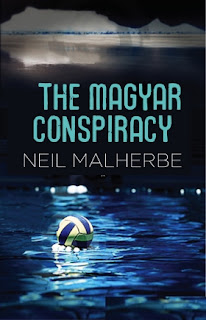 On this blog you will find:

This blog shares information about writing and illustrating. However, SCBWI SA does not necessarily endorse the non-SCBWI announcements or advertisements.

Links to related organisations in SA

Topics on this Blog

Links to some SA authors & illustrators

Past SCBWI events held in Gauteng in 2015

Past SCBWI events held in Gauteng in 2014

Past SCBWI events held in Gauteng in 2013

9-10 May 2013: Drawing: The body language of children, people and animals - a workshop facilitated by Joan Rankin

Book critique: Have your story professionally critiqued. Two experts in children's books will critique your picture book text or an excerpt from your longer story for an agreed fee. We will call for submissions at the end of June.

2 July 2013: Neil Malherbe, winner of the 2013 Crystal Kite award and the Sanlam Silver Prize and Edyth Bulbring, winner of the Percy Fitzpatrick award for Youth Literature, will talk about writing for young adults.

20 September: Spring outing to a rural church painted by Anna Wilson followed by a picnic and chance to draw or write in the countryside

Past SCBWI events held in Gauteng for your 2012 Diary

Past SCBWI events held in Gauteng in 2011

24 February 2011: Open Studio with Rozenn Torquebiau
Rozenn talked about creativity and the publishing of her stories and pictures.
20-22 May 2011: Retreat
Participants attended a Retreat called Create, Develop, Review. It was facilitated by Joan Rankin and Donna Wyckoff-Wheeler.
19 July 2011: Sketchbook meeting
Participants discussed their sketchbooks in preparation for displaying these at the IBBY conference held from 31 August to 2 September in Polokwane.
2 August 2011: Critique Group meeting
Each participant brought a piece of writing or illustrating to discuss. This session was facilitated by Joan Rankin.
16 August 2011: Visit Hedgehog Books
Audrey Hitchcock chatted to visitors about her books.
14 September 2011: Open Studio with Janina Pechova
Janina shared her experience in publishing The Little 5. See her website at www.thelittle5.com
4 October 2011: Critique Group meeting
Picture books were shared and discussed.
6 December 2011: End of year function
Lynn JOffe, CEO of Creatrix, used music to stimulate creative writing / illustrating. South African books were exchanged as gifts.

Past SCBWI events held in Gauteng in 2010

See the full article on these Open Studios at

Past SCBWI events held in Gauteng in 2009

3 March 2009: Let's be creative
This event was facilitated by Yvette de Beer and Rob Owen and focused on discovering creativity by using both sides of the brain.
21 April 2009: Meet Jaco Jacobs
Jaco spoke about how he became a writer and the publication of his books, of which there are over 40!
27 May 2009 and continuing with three more workshops: Illustrate and write a children's book for the Trade Market.
This series of workshops was facilitated by Joan Rankin. It comprised hands-on sessions for writers and illustrators and culminated in each participant producing a "book".
1 September 2009: Prepare for the Exhibition
Participants looked at examples of work in progress.
13 October 2009: Finalise your exhibits
Participants discussed final arrangements for the exhibition.
3-10 November 2009: Exhibition at University of Pretoria
12-27 November 2009: Exhibition and workshops at Alliance Francaise
See http://scbwigauteng.blogspot.com/2009/05/draft-programme-for-exhibition-in.html

Past SCBWI events held in Gauteng in 2008

28 February 2008: Multiple images of South African adolescents as reflected in Youth Literature, a paper presented by Judith Inggs
Maryanne and Shayle Bester spoke about their writing and illustrating.
10-14 March 2008: Writing for children
Reviva Schermbrucker facilitated a course on writing for young readers. It comprised 1) Our childhood is the source 2) Subverting expectations 3) Plotting a picture book from problem to resoution 4) Different genres, different age needs and 5) Your personal project
23 May 2008: Blogging for writers and illustrators
Damaria Senne introduced the concept of blogging and how it can establish web presence.
5 August 2008: All about publishing
27 September, 4, 11 and 18 October 2008: Illustrating children's books
This course was facilitated by Joan Rankin and comprised hands-on sessions about 1) Line & figure drawing, 2) Tonal values 3) Composition and 4) Colour and painting techniques
4 November 2008: End of year social
Participants chatted about publishing aspirations and successes over the past year.

Past SCBWI events held in Gauteng in 2007

3 March 2007: Launch of SCBWI SA in Gauteng
A range of children's books were presented and discussed by Joan Rankin. Jenny Hatton facilitated a discussion on plans for SCBWI in Gauteng.
8 May 2007: A publisher's point of view
Publishers from Jacana and Lapa explained their submission policies and discussed the types of books they looked for.
12 July 2007: Share your publishing successes
Children's book illustrators and writers shared their books.
4 September 2007: Preparing and presenting a portfolio
Children's book illustrators shared ideas on portfolios.
20 November 2007: Dual speaker event
Nicoline Wessels and Hannalie Knoetze discussed the research they have done in three schools on books that under-priveleged children are reading.
Penny Hochfeld reported on the Exclusive Books IBBY Award.

Every second year the National Sections of IBBY are invited to nominate authors, translators and illustrators whose work has made a significant contributiion to the recent literature of books for children and young people. These books are then presented at the IBBY World Congress in the following year. A handsome brochure is produced featuring all the Honour List books from the 74 National Sections; a plenary session of the Congress is devoted to a presentation of the books; and the books are on display throughout the Congress.
In 2011, the following announcements were made:
Author: Afrikaans – Linda Rode for In die Nimmer-Immer Bos
Author: English – S.A. Partridge for Fuse
Translator – André P Brink for Die avonture van Alice in Wonderland (from the original English Alice’s Adventures in Wonderland by Lewis Carroll)
Illustrator – Joan Rankin for Just Sisi

“Slowly publishers realized
that children’s books could be
about just having fun without
any lesson or moral attached.”
~ Laura Backes,
Children’s Book Insider